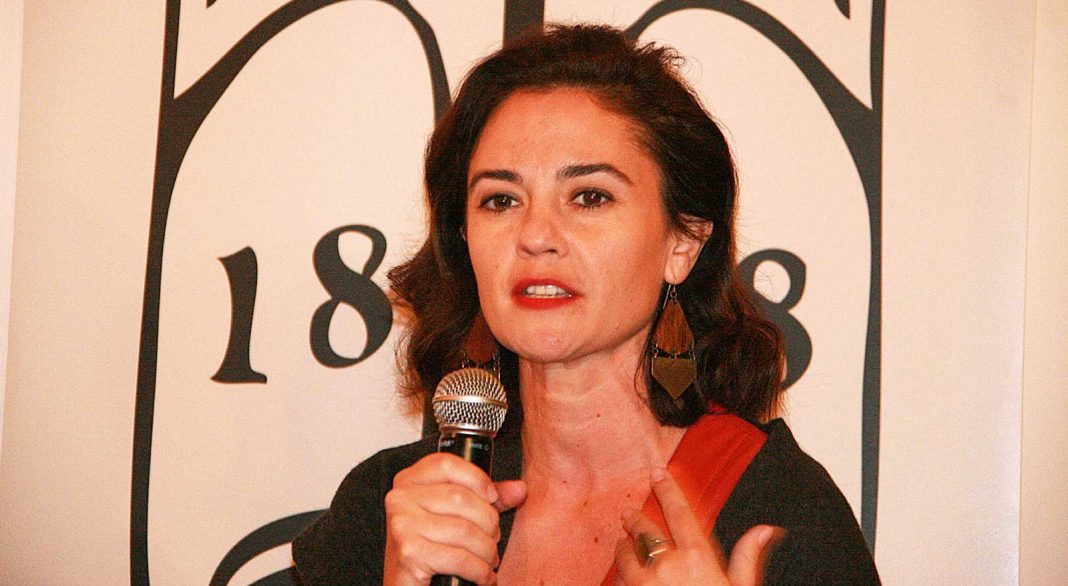 Meet Monica Cure, a Romanian-American poet and writer, translator, and speaker. A former professor with a PhD in comparative literature from the University of Southern California, she is the author of Picturing the Postcard: A New Media Crisis at the Turn of the Century (University of Minnesota Press). After completing her second Fulbright grant to Romania, she began working on a series of poems inspired by her time there. She read at the 2019 international Poets in Transylvania Poetry Festival. Among other literary and cultural projects, she translates scripts in development for HBO Romania and leads workshops on collective dialogue.

Monica, you were born in Arad, Romania, and when you were very little your family moved to America. It seems you have never forgotten your Romanian origins. Since you returned to Romania a few years ago, you have been happy to discover the charming simplicity of rural life and your family’s past, which is also yours, even before you were born – some sort of “post-memory”, as Marianne Hirsch would call it. What significance do your Romanian roots have in your life?

Yes, I was 2 years old when my family and I left Romania as refugees during communism. That might seem like too young an age for the experience to have affected me directly, but I have so many early memories of that time, like not wanting to go a special school program (Early Head Start) on the first day, because I didn’t speak English. Growing up bicultural, the normal process of identity formation can become even more complex. You ask yourself how much of this confusion is just because life is confusing and how much of it is because part of me comes from somewhere else? When I first visited Romania after the revolution as a young teenager, it felt magical. Discovering a whole world in my secret language and seeing which “quirks” of mine actually came from there, it was so easy to ignore anything unpleasant. Being here now, I get to decide what I want to keep and develop, definitely my grandfather’s legacy of opposing an unjust regime, definitely a value for tradition as a living tradition.

What exactly in the Romanian landscape set your poetic talent whirling? Can you put your finger on the first experience that woke you to poetry or was it an accumulation of moments?

The pace of life in Romania is slower, though some people, especially in Bucharest, might beg to differ. There’s also a certain coziness and familiarity even among strangers. I found the combination of these two things incredibly inspiring. A friend of mine who read the first poems I wrote in Iași claimed that I wrote “urban poetry.” Most of the poems are indeed set in the city but they’re very contemplative. They come from being able to walk around and observe without rushing. It had been quite awhile since I was regularly in that state.

When I think of poetry I always hear Emily Dickinson whispering in my ear: “If I read a book and it makes my whole body so cold no fire can warm me, I know that is poetry. If I feel physically as if the top of my head were taken off, I know that is poetry. These are the only ways I know it. Is there any other way?” Poetry was Emily’s whole life and her whole world. Her poetic experience was total and all-consuming; it was somatic and transcendental. What is poetry to you?

Writing poetry is both terrifying and a relief

I’ve always loved that Emily Dickinson quote, too. It’s perfect for the experience of reading poetry. Writing poetry makes me think of a different metaphor. In one of my poems, I compare poetry to exorcism: “The laborious process/ that gives an exact name/ to a speechless possession.” In writing poetry, there’s both mystery and science, a coming together of the heart and the mind. It’s both terrifying and a relief.

American poetry as we know it today grew from the seeds planted by Emily Dickinson and Walt Whitman, the bard for whom ”the United States themselves are essentially the greatest poem.” Is there a spirit of the American poetry by which you let yourself inspired or are you a bicultural poet or rather a poet of no fixed cultural lineage?

I wrote my first short stories in first grade, at the same time I was learning to read. I felt a compelling need to express myself in the language that had just become mine, partially as a way of coping with its strangeness. Then in second grade I moved on to poetry, discovering it as a more powerful way to explore emotions. Perhaps I’m an American poet in that American poetry is obsessed with identity and self-expression. What began with Walt Whitman’s “Song of Myself” transmutes into the confessional poetry of the 50’s and 60’s. In high school, I came across Anne Sexton’s poetry on a bookstore clearance rack and immediately resonated with her work.

Poems like “At University Station” and “In front of Golia Monastery” strike me as Poundian one-image poems aimed at capturing the epiphanic flickeriness of moments. Is the title of the former an echo of Pound’s “In a Station of the Metro”? And is the latter a pocket of spiritual transcendence in a fast moving world of technology? Do the exchange of glances and mute prayers make the poem “a momentary stay against confusion,” to use Robert Frost’s words in “The Figure a Poem Makes”?

“At University Station” isn’t specifically referencing Pound but, absolutely, the primacy of the image in these poems is indebted to him. The images give rise to these moments of transcendence,

something very much rooted in the present and the everyday, but so connected to the past and the future that it seems to escape time. Because “At University Station” and “In Front of Golia Monastery” refer to specific places, the effect is layered. University station in Bucharest is an important location in the ‘89 revolution and the site of many post-communist protests. The foundation of Golia Monastery in the very city center of Iasi dates from the 16th century, a silent witness to all the passing generations. These poems are also future-oriented. The speaker sees something, discovering a need to take some kind of action. Yes, the result can be likened to Frost’s “momentary stay against confusion” but in the sense of knowing that something must be done, rather than another kind of wisdom.

In October 2019 you read at the international Poets in Transylvania Poetry Festival. Can you describe that experience?

Translating scripts in some ways feels very much like writing poetry

Reading at the Poets in Transylvania Poetry Festival was a pure delight and I’m grateful to organizer (as well as professor and poet) Radu Vancu for having invited me. Writing poetry is seen as a solitary activity but it’s also a social one. Poets need community – the right kind of community. I got to connect to wonderful writers from Lithuania, Poland, Spain, Israel, and the Netherlands among other places but also to Romanian poets and my fellow American poet in Bucharest, Tara Skurtu. For me, diversity is inspiring. Reading my poems in Sibiu also felt particularly significant because my father was born there and my grandmother’s line comes from there as far back as anyone can trace.

You translate scripts in development for HBO Romania. What are, to your mind, the challenges of translation? Is poetry, as they say, what gets lost in translation? Is there any gain?

Translating scripts in some ways feels very much like writing poetry. You’re not only communicating information as precisely as possible, you’re trying to recreate the conditions for an entire state of mind. T. S. Eliot’s objective correlative theory, that poetry must be based on finding “a set of objects, a situation, a chain of events which shall be the formula of that particular emotion,” says it well. I find the work incredibly meaningful, making a foreign experience from a Romanian cultural context feel familiar, relatable even, to an English-language reader.